Uzbek fabrics with a specific pattern have become a UNESCO World Cultural Heritage. Their bright pattern is recognizable all over the world. These fabrics appeared at the beginning of a new era and became a distinctive sign of the region. They cannot be confused with any other textiles today.

Silk ikat that we use to create our kimonos was once literally worth its weight in gold — peace was concluded between countries in return of these precious fabrics, prisoners were exchanged for it, it was sent with ambassadors to the rulers as gifts. Silk and velvet ikats (520 samples) presented to the Romanov family as ceremonial offerings by the last Bukhara emir formed the basis of the largest textile collection in the world.

The method of applying the dye is vaguely similar to the nodular technique of batik.

As a result a slightly pulsating edge of the pattern and a white stripe – a ramp appear on the fabric.

The threads go through 100 processes or 120-150 days before we get the final fabric.

Then the threads are stretched on a special frame and tied before dyeing.

The width of the frame for each master weaver is different; the masters with whom we cooperate have a frame with a width of 2,2 meters.

The threads are tightly pulled into bundles, for example with tape, then all are dipped in dye. In the places of the screed, the fabric remains white. If the fabric needs to be painted in several colors, it is stretched again on the frame, a new screed is applied and painted a second time.

The threads are removed from the machine in bundles. And then they are already stretched on a loom, and woven by hand.

The frequency of repetition of the ramp is equal to the width of the frame on which the fabric was stretched and that is 2.2 meters.

It is impossible to make a finished fabric without a ramp at all.

Oriental tailors do not remove the stripes as the ikat fabrics are woven from silk and by hand, the fabric is expensive therefore tailors do not cut it.

In addition this white stripe confirms the artificiality of the fabric and helps to create things with a unique pattern.

According to the described technology, several types of fabric of different composition are made:

Suzani is a type of embroidered and decorative tribal textile made in Tajikistan, Uzbekistan, Kazakhstan and other Central Asian countries. Suzani is from the Persian Suzan which means needle. The art of making such textiles in Iran is called Suzandozi (needlework).

Suzanis were traditionally made by Central Asian brides as part of their dowry, and were presented to the groom on the wedding day.

The main embroidery schools were finally formed in Uzbekistan by the 19th century. Tashkent, Nurata, Bukhara, Shakhrisyabz, Samarkand, and Ferghana schools are distinguished, however this division is rather relative, since modern Suzani art is increasingly subject to mixing patterns, embroidery methods and the use of modern materials.

The process of drawing a pattern on a light fabric in the old days was made with homemade ink from soot. For dark fabrics, light clay was used (sometimes with the addition of molasses). They drew with a reed pen or a pointed stick. Now the craftswomen use fountain pens and pencils. Unlike European drawing, Samarkand draftswomen Suzani begin their drawing with small patterns, starting with particulars and moving on to the whole. The manner and style of drawing in each region and each draughtswoman is different.

Bukhara suzanis are truly considered one of the most beautiful in Central Asia. A distinctive feature of Bukhara embroidery is the use of a tambour seam. The patterns and compositional execution of Bukhara products are rich. Most often in the ornament of Bukhara suzanis there is a closed composition with the allocation of the center and corners, while the main motif is a round rosette. The socket can be presented in this case in different versions.

Each pattern and curl carries a certain meaning. Knowing the essence of each element, you can easily read whole embroidered messages.

Usually these are wishes for wealth and numerous offspring, but it is said that the wives of prisoners in the camps, passing handkerchiefs and towels made by their own hands to their husbands, could tell them the main news about events in the family, embroidering words and even whole phrases with special patterns.

If we study suzani in great detail in each of them we will find an unfinished section. This is done in order to show the continuity of tradition – a young bride can finish the work as she wishes (but usually they do not finish it because of a superstitious fear of completing their life’s work ahead of time).

It is also worth mentioning special “traps for evil spirits” – patterns with intentionally made mistakes. In Uzbekistan there is a belief that if shaitan (Devil) sees some inaccuracy or an incorrect number of elements on a seemingly symmetrical composition he will “get stuck” in embroidery and will forever recalculate the elements and they will constantly not converge with him.

It sometimes takes several years to make a large suzani, so girls begin to embroider a dowry when they are still very young. This is a huge and painstaking job. Cotton or silk is taken as the basis. Patterns are embroidered with silk, woolen threads or purchased floss. Until now, in some villages, embroidery threads are hand-dyed with improvised dyes.

The embroidery of Tashkent craftswomen is distinguished by a very peculiar style. There are two types of large decorative embroideries here – these are palyak and gulkurpa. The main motif of the pole is large dark red circles densely filling the surface of the fabric. Gulkurpa (floral blanket) is decorated with floral ornaments. The motifs of stylized stars, the sun, flowers – all this is necessarily present in the creation of the ornament of both the stick and the gulkurpa.

Samarkand embroidery originates from the art of ancient Sogdiana. Samarkand pieces unlike Nurata and Bukhara, have larger and laconic details of the pattern. At the same time, the clarity of the patterns is important. The main Samarkand motif is a round rosette of crimson tones surrounded by a leafy ring.

We pick the suzanis ourselves mainly in Uzbekistan, sometimes – Tajikistan. These are both vintage rare pieces and modern, created nowadays by women artisans in different regions of Uzbekistan. 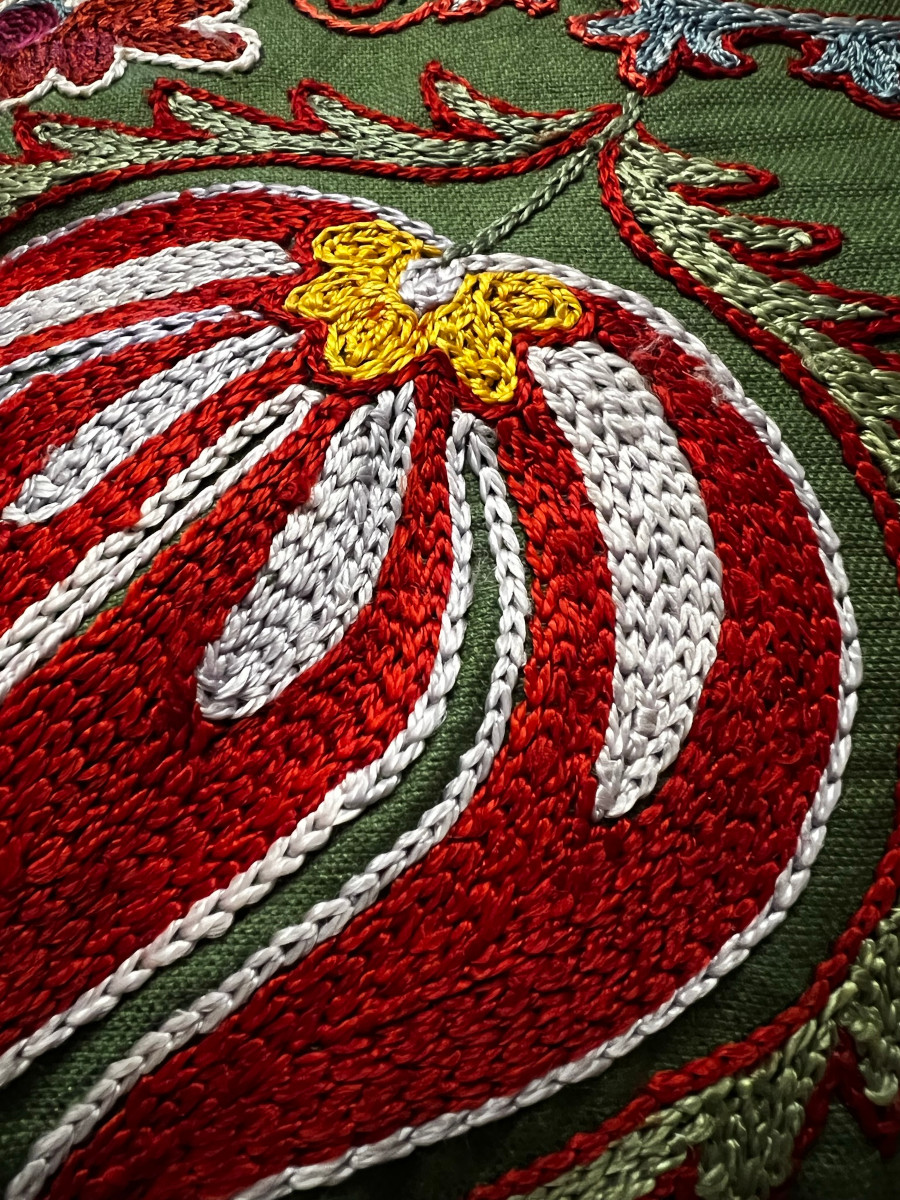 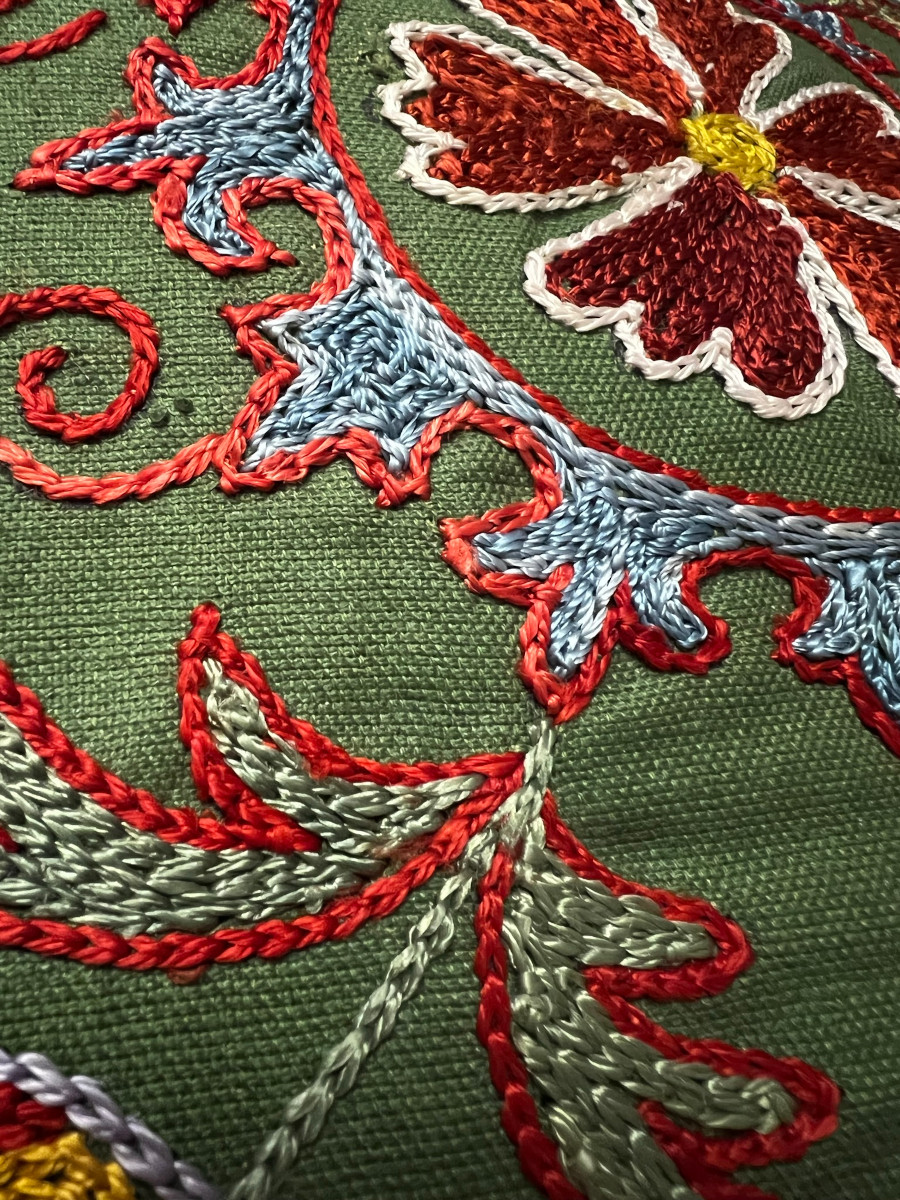 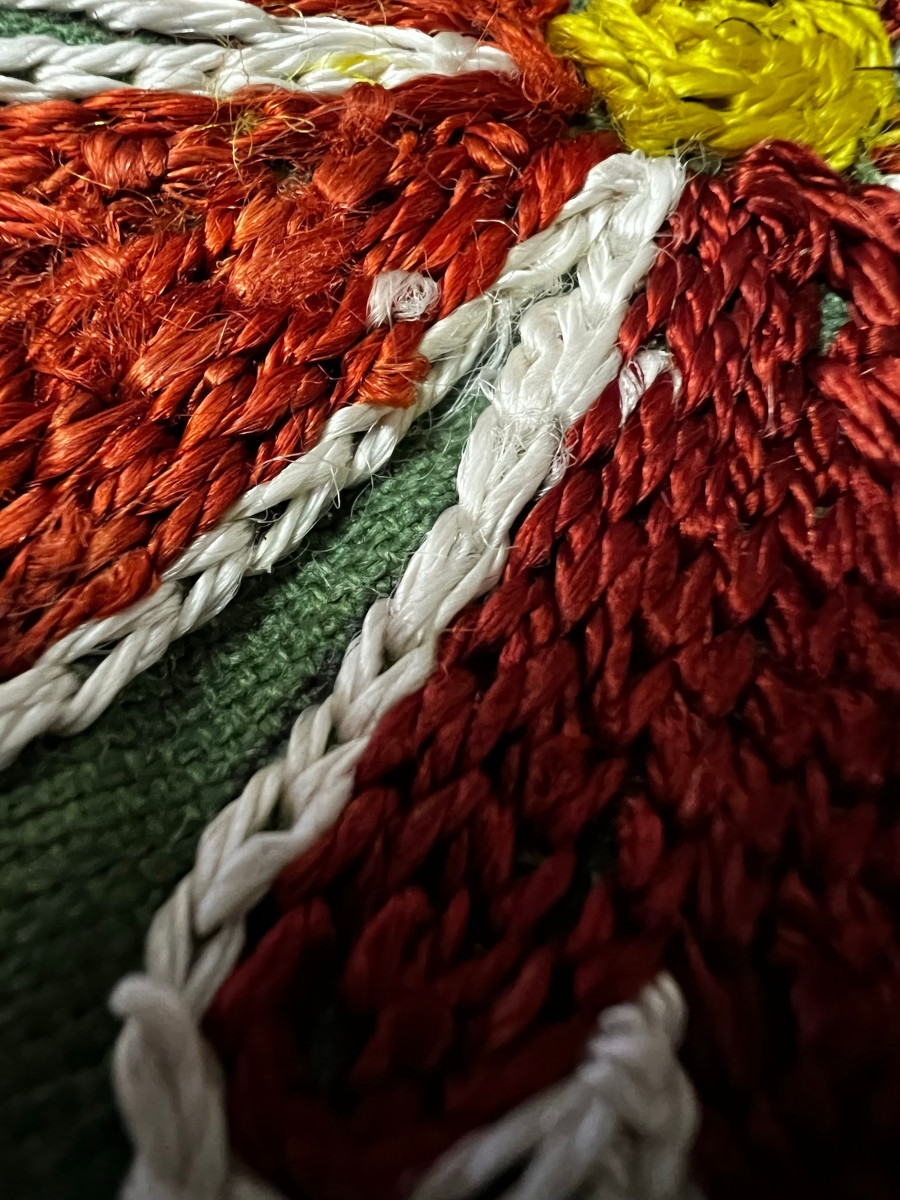 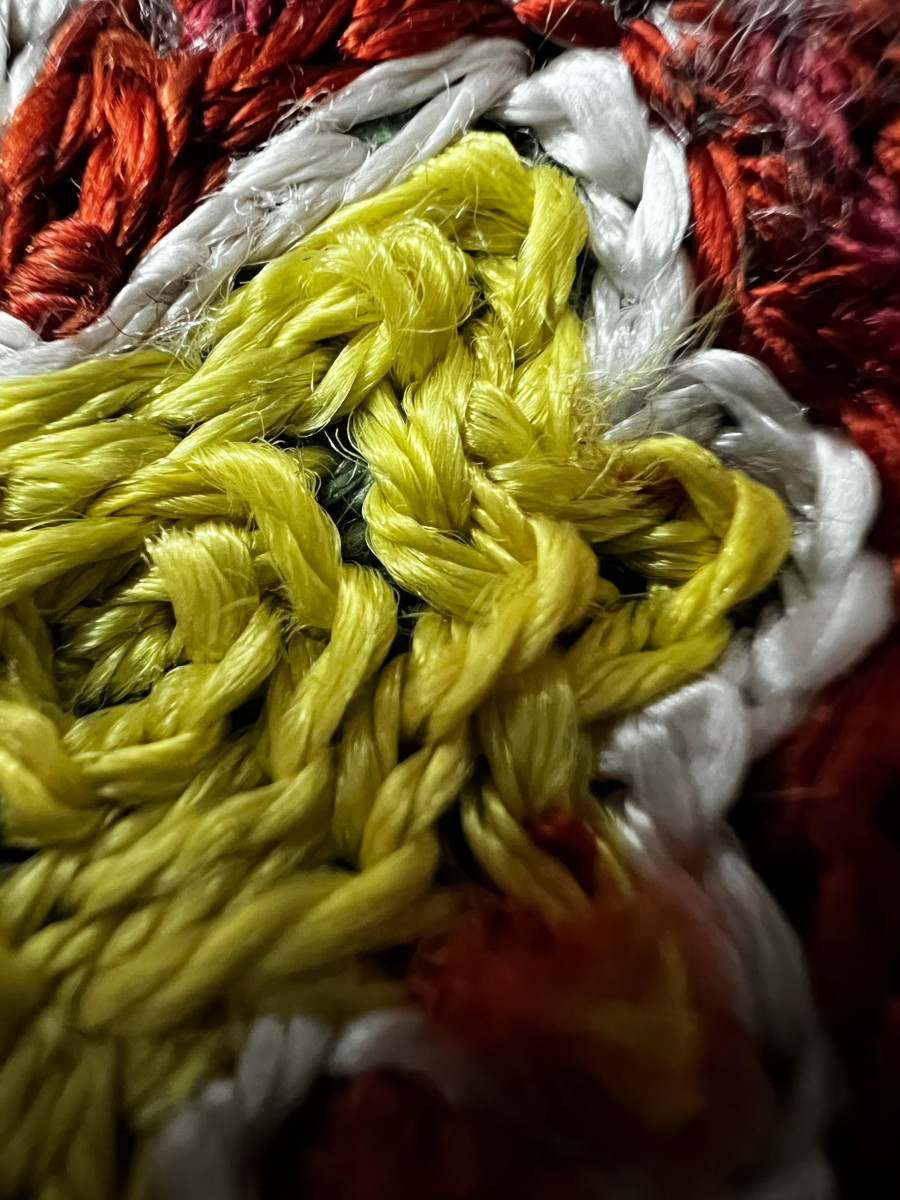 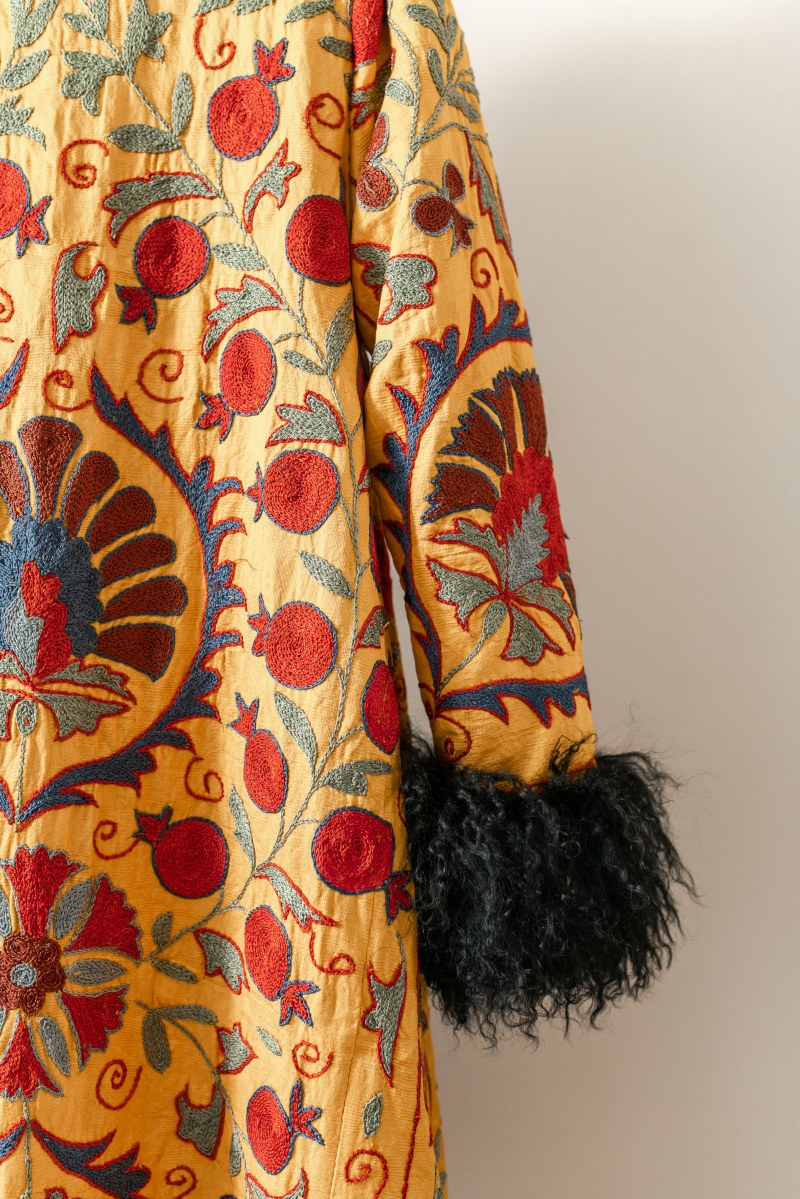 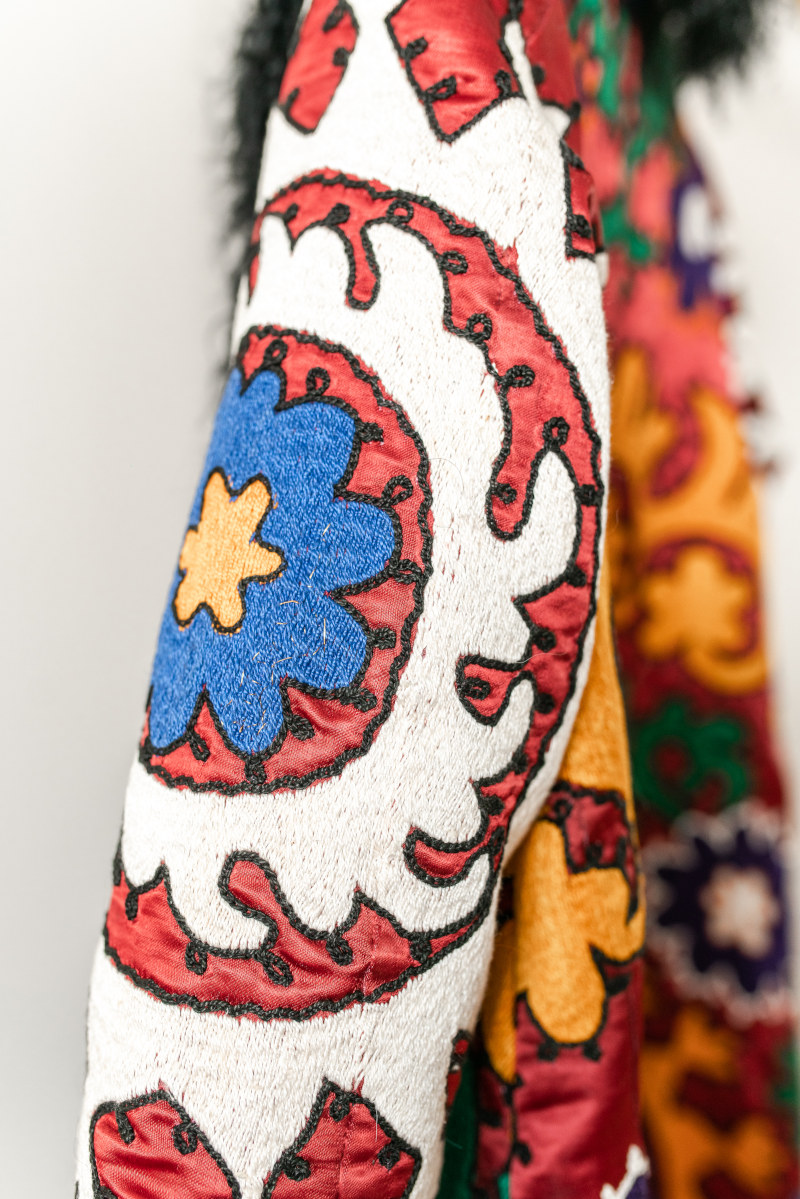 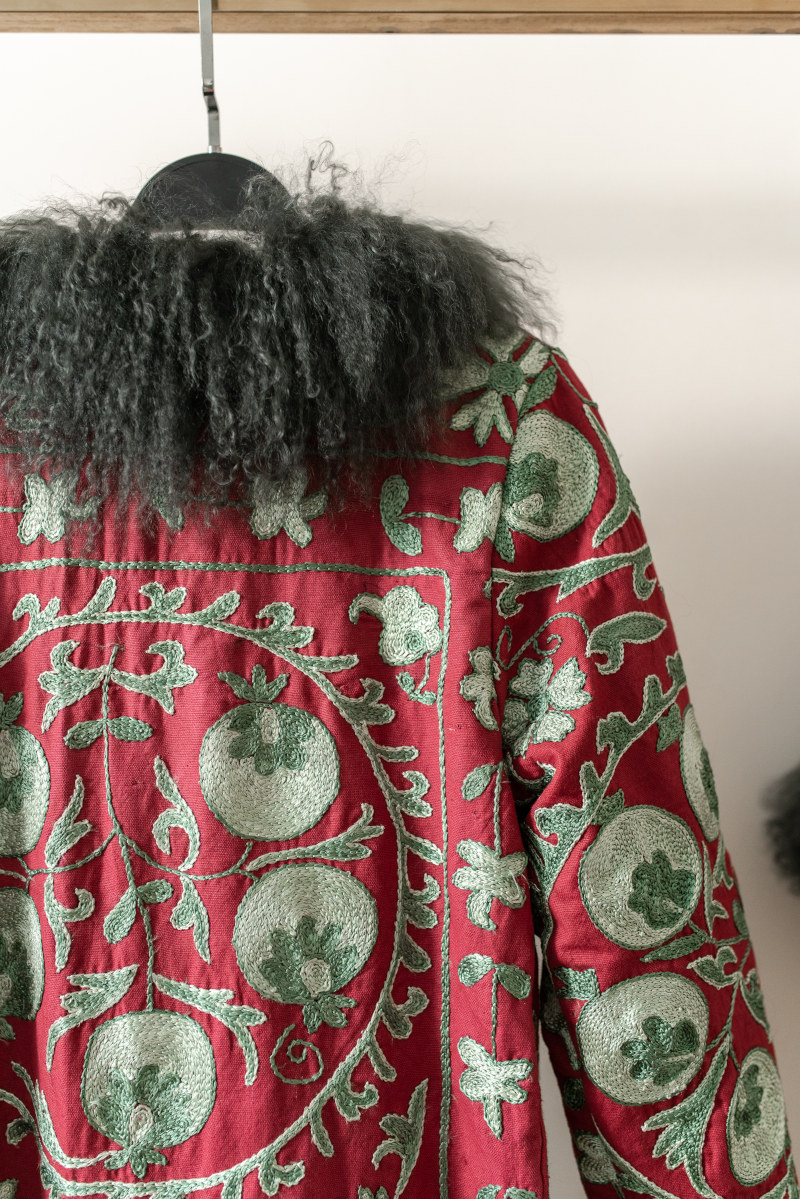 A beautiful legend says about a poor weaver who fell in love with a girl and for the sake of his future love created an amazing silk fabric. Its patterns depicted light clouds reflecting on the surface of a mountain lake, iridescently colored by the sun’s rays. The morning breeze gave this reflection a barely perceptible ripple.

We create unique, one of a kind clothes.

We use cotton and silk Adras (Ikat), Shoi (100% silk) , Bakhmal and Beqasam fabrics for our kimonos, robes, dresses and kaftans.  You will never find them on the shelves of ordinary stores.

Adras (Ikat), Bakhmal (velvet or velveteen) and Shoi (silk) are ancient abra fabrics. “Abra” is a cloud that carries moisture which isn’t the only reason why it’s called cloudy. After all the patterns on them are like airy feather clouds.

It is not possible to get two fabric cuts with the same pattern. Each canvas can be compared to a painting as the master works on each thread just like the artist on each stroke. It can take a whole week of hard work to create one piece of fabric.

A BIT OF HISTORY

The main feature of natural «abra» fabrics is abstract pattern that resembles light feather clouds. Such patterns are created by the method of backup dyeing of the threads before they are threaded into the weaving machine.

The earliest examples of “cloud” fabrics come from such geographically distant places as Yemen and East Asia, but you can be sure that this type of textile was an integral part of the culture of many countries. Either way the dyeing technique associated with it was known not only in Japan and the Middle East but also in West Africa, in the countries of Central and Southeast Asia, in China, Latin America (pre-Columbian Peru and Guatemala, as well as Mexico, El Salvador, Ecuador, Bolivia, Chile, Argentina) which indicates its possible independent occurrence in different parts of the world.

As for Central Asia, it is believed that the first mist fabrics were made here in the sixth century. Back then there were three great khanates on the territory of modern Uzbekistan: Khiva, Bukhara and Kokand. The spread of the technology of manufacturing cloudy fabrics on the Asian continent was undoubtedly associated with the Great Silk Road which was the pathway not only for the goods but ideas as well.

Silk and cotton robes and other products, made of fabrics that amaze the imagination with their colors and intricate patterns, were the brightest indicator of the status and prosperity of their owner, the most demanded product in local and foreign markets.

The special technology of their manufacture was passed on by the families of craftsmen from generation to generation. This craft concentrates the centuries-old traditions of the peoples of the East, reflects a unique patterned and coloristic style.

Nowadays, such fabrics are hand-made only in historical places of Uzbekistan and Tajikistan

The fabric can be made of silk, cotton or mix of cotton and silk threads. The manufacturing technology is very complicated, it’s a handmade production. First of all sections of the thread are dyed with special organic dyes. Then each thread is connected and intertwined with the previous one in such an intricate way that it is impossible to trace its beginning and end. This creates a unique ornament.

Genuine Uzbek Ikat fabric is woven on a narrow loom using ancient techniques in Uzbekistan. Ikat is the ancient Uzbek art of hand dyeing and then hand weaving silk and cotton threads into bright and vibrant traditional and complex designs. Ikat manufacturing consists of 12 steps of traditional craft: